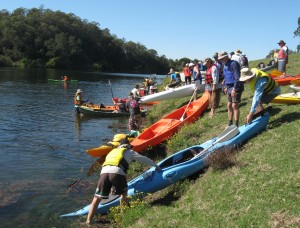 What a fine day it was and what a great way to arrive at the River Festival by paddle power!

Early on Saturday morning, over 50 people chose this mode of travel and took more than 30 boats to Nelsons Wharf 9km upriver from the Festival site. They had followed the call by the Save Our Macleay River (SOMR) community group.

Uncle Grahame Quinlan welcomed the paddlers to country and the river. When growing up at Burnt Bridge, he used to fish in this area. 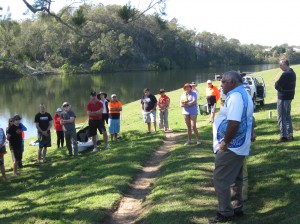 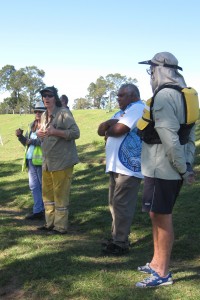 SOMR Chairman Arthur Bain gave a brief introduction on concerns about water contamination from past and current mining in the Macleay River catchment. He noted that the operations at Hillgrove Mine have seen considerable improvement and welcomed two representatvies of the mine who had made their way down from Armidale to particpate in the Paddle on the Macleay 2014. Arthur also pointed out that it is of great importance to improve remediation of abandoned mines. He expressed his hope that a scheme poposed by politicians to build a dam in the Apsley River, a major tributary of the Macleay, will never eventuate. On the outgoing tide, the boats made swift progress towards Kempsey. From Greenhill two Marine Rescue volunteers on a jet ski accompanied the paddlers and made sure anybody in trouble would get immediate help. Upstream from the railway bridge all paddlers took a break and were treated to cups of tea and coffee, biscuits and cake. Here they were joined by two row boats from the Crescent Head Surf Life Saving Club. 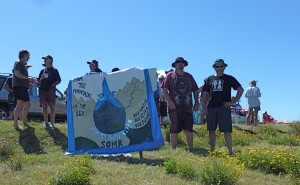 Stopping for a cup of tea 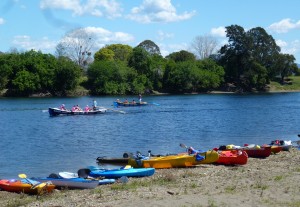 Two dragonboats completed the colourful flotilla on the final stretch, passing the Festival site to the sound of a digeridoo playing at the main stage and the cheers of onlookers.

There was a smile on every face as the boats landed at the Eastern side of the Riverside Park. Talks about the location of the Paddle on the Macleay 2015 could be overheard.

On Tuesday 23 September, The Macleay Argus reported about the Paddle on the Macleay: