Save Our Macleay River Inc. will hold its Annual and General Meeting at the Kempsey Macleay RSL board room at 10.30am Saturday 29th July 2017

To ensure SOMR’s on-going procedures are in accord with the Constitution at least 4 members of the current Committee are required be present.

The AGM is to elect the next SOMR Committee and Office Bearers:

The Constitution requires the Committee to comprise of four (4) required ‘Office Bearers’ namely President, Vice President, Treasurer and Secretary, with a total of seven (7) on ‘The Committee’. SOMR Committee currently includes the optional office bearer position of Public Officer.

There are a number of administrative tasks/roles within SOMR, that are currently informally delegated (eg. membership, mail-out, website and Facebook management) whether these need formalising through optional Office Bearer positions or kept on an informal basis can also be debated at the meeting.

Nominations for the Committee (and Office Bearers) should be in writing signed by two (2) SOMR members and with the consent of the candidate and delivered to The Secretary prior to the AGM’. Commttee Nomination_2017

If insufficient nominations are received in writing, candidates can be nominated and accepted at the AGM.

Please note: Membership renewals are due on July 1st – the start of the new financial year. This can be done by either electronic funds transfer and emailing your completed Membership Renewal form, or via traditional post. Renewal Form Membership Renewal_2017

Hillgrove Mine For Sale

Hillgrove Mine is for sale – once again. Purchased by Bracken Resources in early 2013, the mine’s operation was halted in December 2015 after only 20 months of production. At the time, the main product was antimony.

While the mine has been in ‘care and maintenance’ with a much reduced number of staff, the DA process for the expansion at Clarks Gully was followed through, exploration of gold orebodies was carried out and plant modifications to increase gold recovery are being prepared.

Hillgrove Mine General Manager, Scott Jones, describes the mine as object for sale with an emphasis on a so called “Transition to Gold Strategy”. His document is published on

On July 10, Hillgrove Mine CEO Scott Jones informed SOMR members about the developments at the mine.
Click on the link to read the notes Hillgrove Mine Meeting 10-7-17

In May we reported about the surprise encounter between SOMR chairman Arthur Bain and Directors of the Mineral Exploration Company Force Commodities Limited (4CE) at Gibsons Open Cut. As a result, SOMR received a lengthy letter from 4CE, informing SOMR, as a “important environmental stakeholder”, of the nature of their planned exploration drilling.

4CE, or as they refer to themselves, “Force” received approval from the Department of Planning and Environment on 16 May 2017 and intend to begin work in late June. Read the letter on SOMR 4CE Letter to Save our Macleay – Exploration activities

The letter is dated 25 May and signed by Executive Director Alistair Stephens. On 31May, in his address, the Chairman Mark Darras assures shareholders that he and the board members Peter Smith and Alistair Stephens (both visited Gibsons Open Cut) are “men of strong principles and ethics”. All three resigned on the same day, immediately prior to the company’s AGM.

It seems that Halls Peak with the potential profits from the existing mineral wealth continues to be a pawn in the game of a shareholding company.

At the meeting on 10 June, committee members confirmed the importance of SOMR’s commitment to protecting the water quality in the Macleay catchment. The Ecohealth Card, as well as ongoing water tests at Bellbrook, show high levels of in stream nitrates which largely result from use of fertilisers in agriculture. Degradation of the creek and river banks, the riparian zones, also contribute to water pollution. At KSC’s launch of the Ecohealth Card on 2 June, Mayor Liz Campbell stated that Council has already acted on two of three recommendations.

SOMR will liaise with Kempsey Shire Council about their work and follow up on aspects affecting water quality. Much of the contamination is coming from the upper reaches of the catchment and SOMR’s concerns are not limited to Kempsey Shire. SOMR is also monitoring logging activities in the Styx River and Mungay/Collombatti areas. Cooperation between the upper and lower catchment Councils is being encouraged.

Paddle on the Macleay – September 2017

This year the paddle will take us from Bellbrook down river to Nook Creek, a tour of about 4 hours.  First preparations and test paddles have begun. We’ll keep you informed about the exact date and other details. 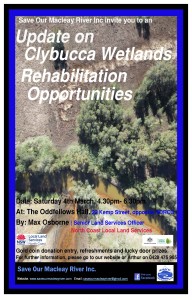 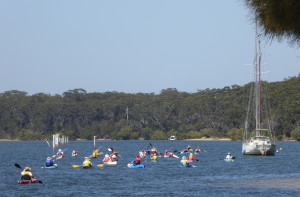 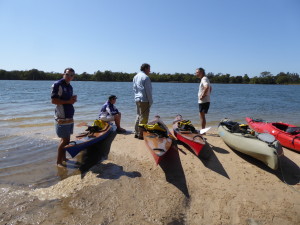 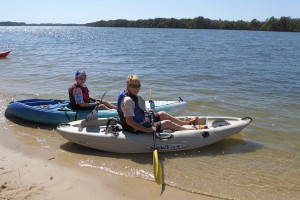 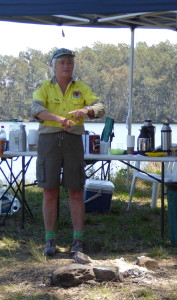 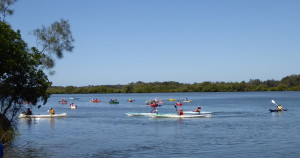 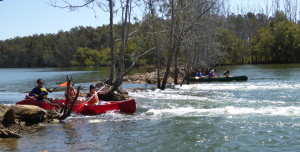 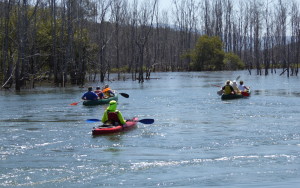 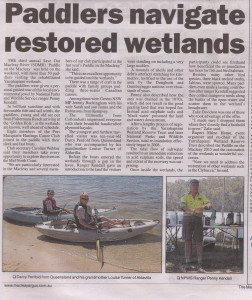 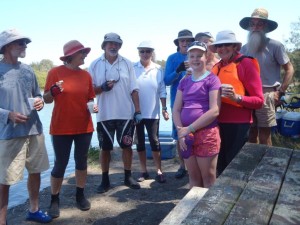