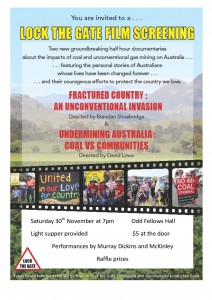 Two ground-breaking new films produced by the Lock The Gate Alliance will be screening at the Oddfellows Hall on Saturday the 30th November from 7pm.

The two 35 minute documentaries tell the powerful stories of Australians whose lives have been changed forever by coal and gas mining, and they show the potential for all regional communities to be affected by the massive expansion of mining activity right across Australia.

The films, Fractured Country: An Unconventional Invasion and Undermining Australia: Coal vs Communities, were directed by filmmakers Brendan Shoebridge and David Lowe from the Northern Rivers, NSW. Both films provide shocking examples of the impacts that both coal and gas mining are having on water resources and the risk they pose to drinking water catchments, farm water supplies and the Great Artesian Basin.