Braving cool showery squalls, about 20 intrepid paddlers formed a small flotilla of kayaks and canoes to enjoy the SOMR ‘Paddle on the Macleay’, to see the results of the restoration of Yarrahapinni Wetlands.

Save Our Macleay River Inc. (SOMR) were delighted to host and organise interesting stories from stakeholders about the return of the Yarrahapinni Wetlands to its natural state as a salt-water fish-nursery with regenerating mangroves. Almost 50 years of blockage of salt water and drainage, which released frequent and extreme pollution events, resulted in frequent oyster damage and fish-kill events. The return of the Wetlands being “alive again”, was found interesting and much appreciated by these hardy paddlers.

Congregating in light rain at the Golden Hole, Elder Uncle Neville Donovan welcomed the paddlers to this significant Aboriginal area.

Oyster grower Todd Graham greeted the paddlers and described the positive effects of the natural salt water flow in the Wetlands on the health of the river. Besides using improved breeding stock in recent times, the clean water has greatly contributed to oysters maturing very quickly. Unfortunately, black water events from the adjacent Clybucca Wetlands are still occurring with lethal effects on the oysters. The restoration of the Clybucca Wetlands is eagerly awaited.

Launching the boats at the Golden Hole

When entering the wetlands, with the almost high tide carrying them, the paddlers saw salt water pouring in, two to three-metre high mangroves establishing, an abundance of pelicans, cormorants, herons and other birds feeding on fish and even the regeneration of ‘sea-grass’ on the margins of Middle Island.

Going up into The Broadwater, the real expanse of now established fish nursery habitat unfolded. The edges and low islands are strongly tinged with the light green of regenerating mangroves. To the east with a steeper bank is the coastal rainforest, believed to be on top of a part of one the largest recorded ‘Middens’ in Australia.

Going further up, young mangroves were seen in what used to be fresh-water reed ‘side-swamps’, now covered in salt water. After about 1.5 to 2km up, the mangrove regeneration became patchy, but there was one mature mangrove that had surprisingly survived the 45 years of fresh-water!

At a distance of 2-3 km from tidal salt water in flow, the paddlers could see that significant rehabilitation in this area will take time. Small areas of ‘Salt-Marsh’ regeneration are develop ing on the edges of the old and dug ‘channel’, but the dead fresh-water vegetation looked like a bomb zone!

The intrepid paddlers stopped for a ‘lunch-break’ at the site of ‘The Scalds’, some 3.5km up the Wetlands before returning. As the name suggests, this was a large area of Acid Sulphate surface soil scalds, releasing sulphuric acid and pollutants into the Macleay River Estuary every time it dried out and rained again – destroying fish, oysters and tourism. 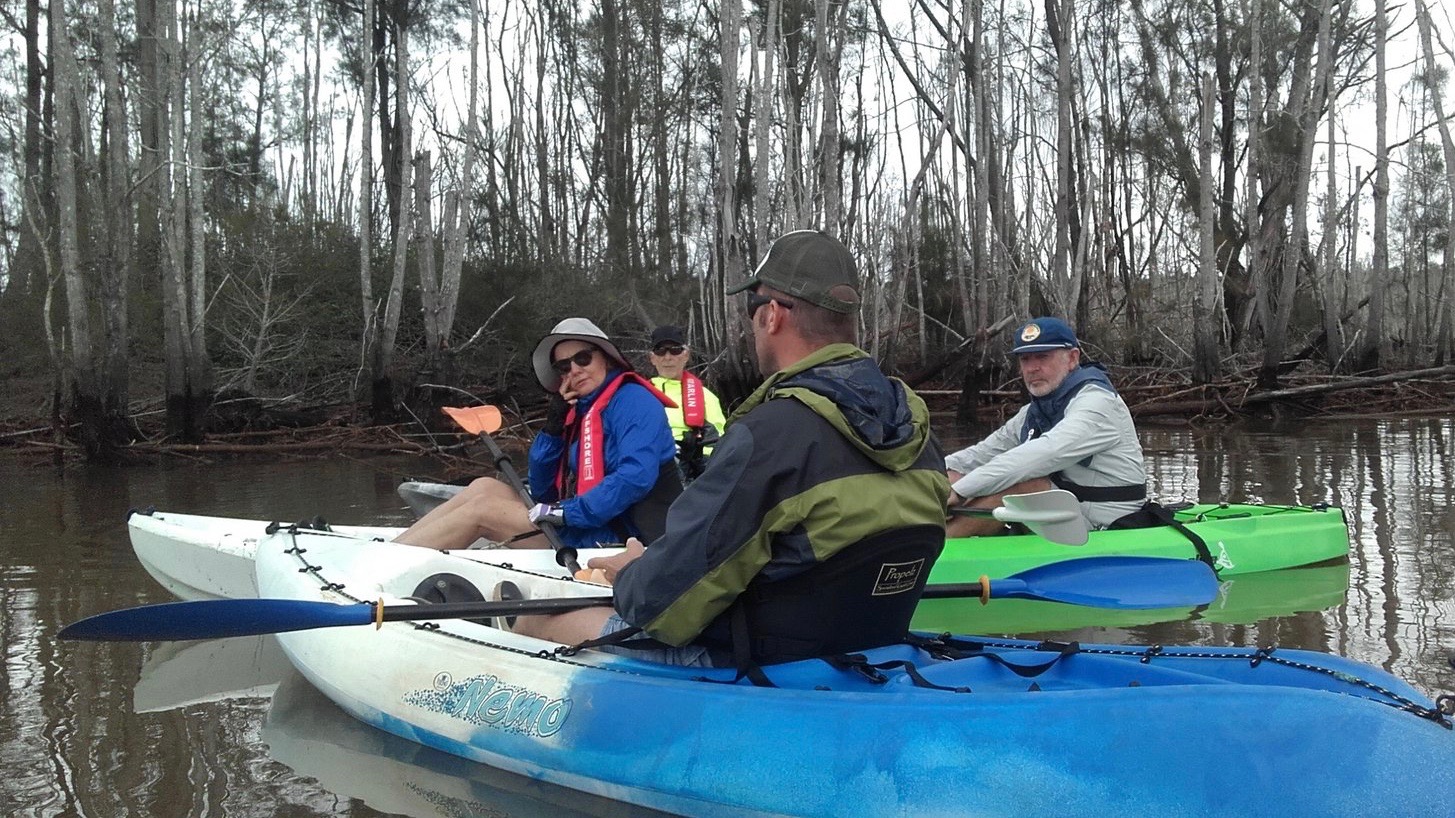 Relaxing at the lunch break, listening to Matt Wills from NPWNSW

During the lunch break, paddlers were interested to hear from National Parks and Wildlife Service’s Matt Wills, of the next steps in the Yarrahapinni Wetlands rehabilitation. It is planned to remove further parts of the ‘levee’, fill-in the remnant ‘flood gates’ and undertake revegetation and bank stabilisation activities; thus restoring the wetlands close to its prior culturally significant and natural state.

Returning to the Golden Hole, most participants just let their boats drift, a most peaceful experience.

It was generally agreed by the paddlers, that this was one of the few ‘success stories’ for rehabilitation of a significant wetland and a boost to the reduction in damage to the environment, economy and tourism from past practices.