Sludge from the containment dam was dumped into the bush 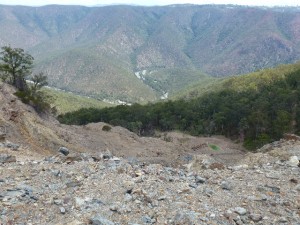 Update 5 February 2014:  SOMR has been informed that the Derelict Mines Office is bringing machines in to clean up the toxic sludge dumped during the botched remediation work.

Community Presentation by Representatives from the University of New England (UNE).

As part of our continued effort to raise awareness of the Macleay River contamination, Save Our Macleay River (SOMR) is facilitating a meeting with UNE scientists.

Scientists from the School of Environmental & Rural Science at UNE will be visiting Bellbrook to provide information to the public concerning the current state of the Macleay River.

Associate Professor Paul Ashley began investigating the Macleay in 1999 & has continued his research publishing several journal articles on the arsenic & antimony dispersion in the Macleay. Senior Lecturers Dr Susan Wilson & Dr Matthew Tighe will also be presenting information & both have published studies on the Macleay & continue to conduct research on the current state of the Macleay Catchment (please visit SOMR website for references).

If you drink the water, fish, canoe, swim or water your stock from our river – you need to be informed!

In the 12 months since Save Our Macleay River Inc (SOMR) was formed, it has become a key player in the monitoring and protection of water quality in our valley’s majestic river.

SOMR was born after a meeting at Bellbrook one blistering summer’s day in January 2013, when 100 people first learnt of a State Government proposal to move soil contaminated with arsenic and antimony from Urunga to Hillgrove in the Macleay’s upper catchment.

During the ensuing months, meetings were also held at Gladstone and Kempsey.

SOMR’s attention soon widened from the transportation of contaminated soils, to general questions about the sale and reopening of the mothballed Hillgrove Mine, plus mining exploration around the Halls Peak area.

By July SOMR was an incorporated body and a force to be reckoned with.

A highlight of SOMR’s campaign to date was its Paddle on the Macleay event held in September.

“Over 100 paddlers in 60 canoes travelling down the Macleay River from Pee Dee Station to Bellbrook was a sight to behold,” SOMR Chairperson, Arthur Bain, said.

“While enjoying the beauty of our river, everybody became more aware of the need to protect it from further contamination.”

In November SOMR held constructive meetings with scientists from the University of New England (UNE), the Environmental Protection Authority (EPA) and Hillgrove Mine representatives. (Reports are posted on the website)

“The mine’s new owners outlined their investment in upgrading water quality management systems and their commitment to ongoing rehabilitation, plus an agreement to share water quality data and have quarterly meetings with SOMR.”

“It was a positive step in building a relationship and recognizing SOMR as a key player in monitoring water quality in the catchment,” Mr Bain said.

The overall picture from these meetings is that the Macleay catchment has been significantly affected bypast mining practices, and the impact on the health of the river remains difficult to determine.

There is high contamination in Bakers Creek Gorge and a 40km plume of heavy metals extending from Bakers Creek to the Chandler River, which UNE predicts will take 1000 years to move through our catchment. There are also hot spots on the flood plains in the Lower Macleay.

Limited sampling of vegetables, meat and fish has not revealed elevated contamination levels of concern. However, it was recommended, that people peel or scrub local vegetables before eating.

SOMR members also visited old mine sites so the group can gain an understanding of the geography and the existing legacy mining issues.

While SOMR has achieved a lot in 12 months, Mr Bain admits there is still a lot more to be done.

“SOMR will be having further meetings with the EPA to discuss the legacy issues derelict mines have on the Macleay and will soon hold a strategy and planning meeting to decide future activities,’ Mr Bain said. “Keeping the community informed is a priority.”

“We are now perceived as a significant stakeholder in monitoring and protecting the water quality of the Macleay River and will continue to work to keep this magnificent natural wonder and asset safe for agriculture, recreation and sustainable industry into the future.”